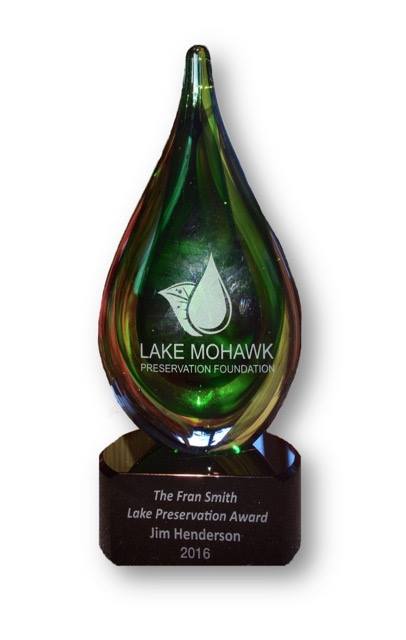 GENE DEPREZ TO BE PRESENTED THE FRAN SMITH AWARD IN NOVEMBER Gene DePrez has been named by the Lake Mohawk Preservation Foundation as this year’s recipient of the Fran Smith Award, the Foundation’s highest honor. Join the Foundation in celebration on Saturday, November 17 at 6pm.

DePrez was an LMCC trustee for 10 years, elected by the board as Vice President for much of that time, and elected by the membership as Club President/CEO for two terms.  He helped lead the board in setting policy and budget priorities focused on implementing the lake restoration plan. He worked closely with Club Manager Fran Smith and the Lake Committee, with support from Steve Sousa of Princeton Hydro. This effort involved substantial research, testing, and the application of the first whole lake alum blanket, and later the lake-wide alum distribution system. During Gene’s board leadership time the Club also moved away from copper sulfate treatments to Sonar for more effective long-term control of aquatic plant growth.

Under Gene’s tenure, the board also started the first rounds of installing additional catch basins and sediment collection boxes, improving older ones, along with other measures to reduce contaminant flow into the lakes. During these years the Board worked with Jim Henderson and members of the Sparta Township Council to devise and implement a septic management program specific to LMCC — a key element in improving the quality of our lakes. Concurrently, the LMCC board and management created an extensive education program alerting members about the use of phosphate loaded lawn fertilizers and detergents. More recently Gene served as the inaugural Chair/President of the Lake Mohawk Preservation Foundation. He helped the group organize, define its mission, pursue tax-exempt status, and develop policies and communications.  Among the programs established by the Foundation in those initial years were the Annual Earth Day Cleanup, the development of the Demonstration Rain Garden, Rain Garden Workshops, and conservation efforts along the Wallkill River.  Gene was instrumental in attracting early contributions to the Foundation.

But Gene says his proudest Foundation involvement was in helping to organize and lead the first Lake Preservation Recognition Celebration in honor of Fran Smith, our long serving, innovative Club General Manager, who was the driving visionary and coach in lake turn around efforts. The first award honored her memory and her many accomplishments.  Each successive year the Foundation has honored an outstanding individual, who provided sustained leadership over a number of years to the preservation and improvement of our lakes, and the headwaters that flow through the Wallkill River watershed. At the same time, the event brings recognition to other volunteers and organizations that have provided leadership and support to advance the Foundation’s mission.

A native of Rochester NY, he has been a Club resident with his wife Patty for 31 years, Gene has been active in the Mohawk Powerboat Club, serving on its board, a member of Beach 6 and other committees at LMCC. In the community, he has been a member of the Sparta Economic Development Committee and served several years as a trustee and President of the Sussex County Arts and Heritage Council. He is on the Leadership Council of Project Self Sufficiency.